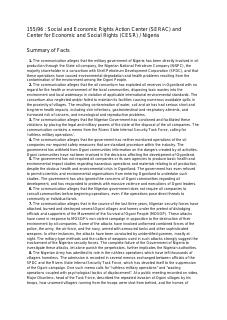 Case Head Notes
The communication alleges that the military government of Nigeria has been directly involved in oil production through the State oil company, the Nigerian National Petroleum Company (NNPC), the majority shareholder in a consortium with Shell Petroleum Development Corporation (SPDC), and that these operations have caused environmental degradation and health problems resulting from the contamination of the environment among the Ogoni People.