ECW/CCJ/APP/07/10 - THE REGISTERED TRUSTEES OF THE SOCIO-ECONOMIC RIGHTS & ACCOUNTABILITY PROJECT (SERAP) v. PRESIDENT OF THE FEDERAR REPUBLIC OF NIGERIA & ORS 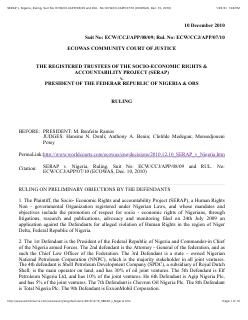