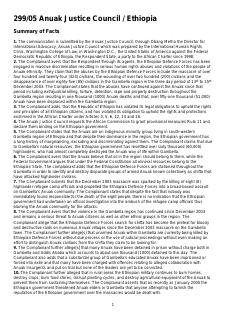 Case Head Notes
The communication is submitted by the Anuak Justice Council, through Obang Metho the Director forInternational Advocacy, Anuak Justice Council which was prepared by the International Human RightsClinic, Washington College of Law, in Washington D.C., the United States of America against the FederalDemocratic Republic of Ethiopia, the Respondent State, a party to the African Charter since 1998.