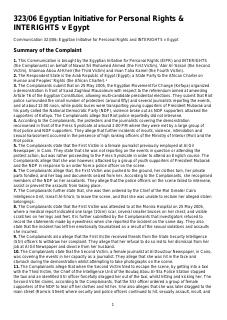 Case Head Notes
The Complainants submit that on 25 May 2005, the Egyptian Movement for Change (Kefaya) organizeda demonstration in front of Saad Zaghloul Mausoleum with respect to the referendum aimed at amending Article 76 of the Egyptian Constitution, allowing multi-candidate presidential elections. They submit that Riot police surrounded the small number of protesters (around fifty) and several journalists reporting the events,and at about 12:00 noon, while public buses were transporting young supporters of President Mubarak and his party called the National Democratic Party (NDP), violence broke out as NDP supporters attacked the supporters of Kefaya. The Complainants allege that Riot police reportedly did not intervene.