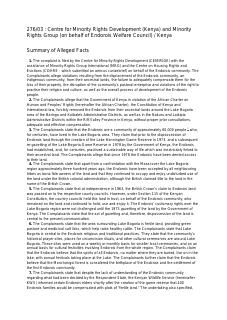 Case Head Notes
The Complainants allege that the Government of Kenya in violation of the African Charter on Human and Peoples’ Rights (hereinafter the African Charter), the Constitution of Kenya and international law, forcibly removed the Endorois from their ancestral lands around the Lake Bogoria area of the Baringo and Koibatek Administrative Districts, as well as in the Nakuru and Laikipia Administrative Districts within the Rift Valley Province in Kenya, without proper prior consultations, adequate and effective compensation.